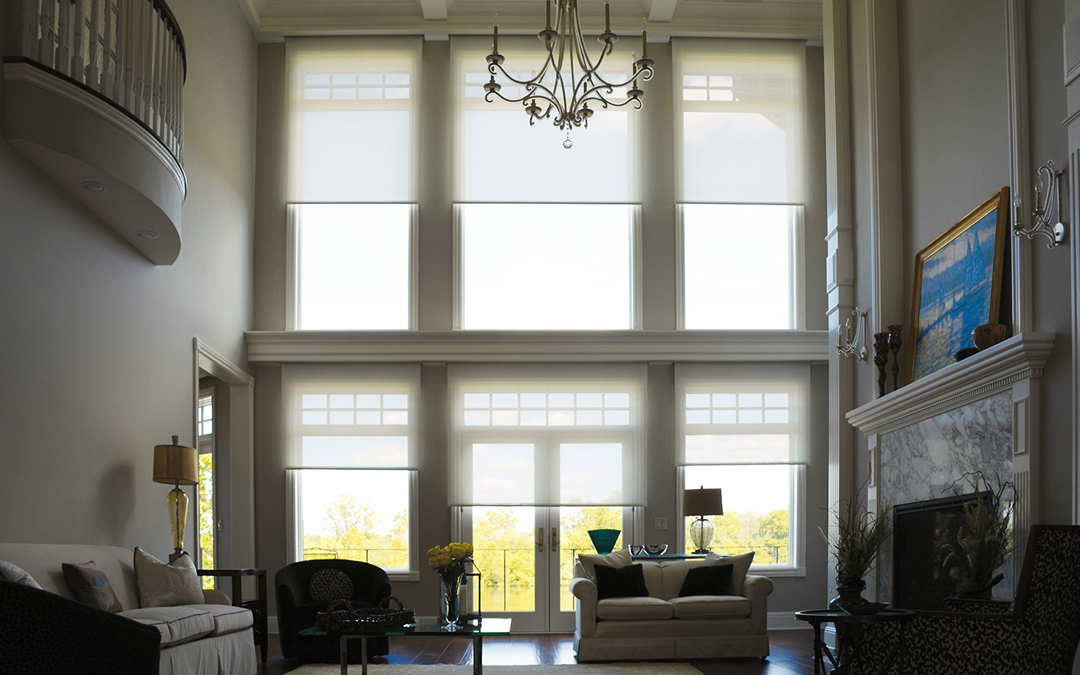 A plethora of choices exist when it comes to customizing window shades. From color combinations and openness factor to panels built to fit individual window specs and environmental benefits, window shades are one of the most customizable design solutions you can find. And they add a personalized touch, especially when it comes to their controls.

Control systems give users the ability to personalize shades to their needs and preferences. Here are just a few examples of how the right shade control system can create a custom experience: 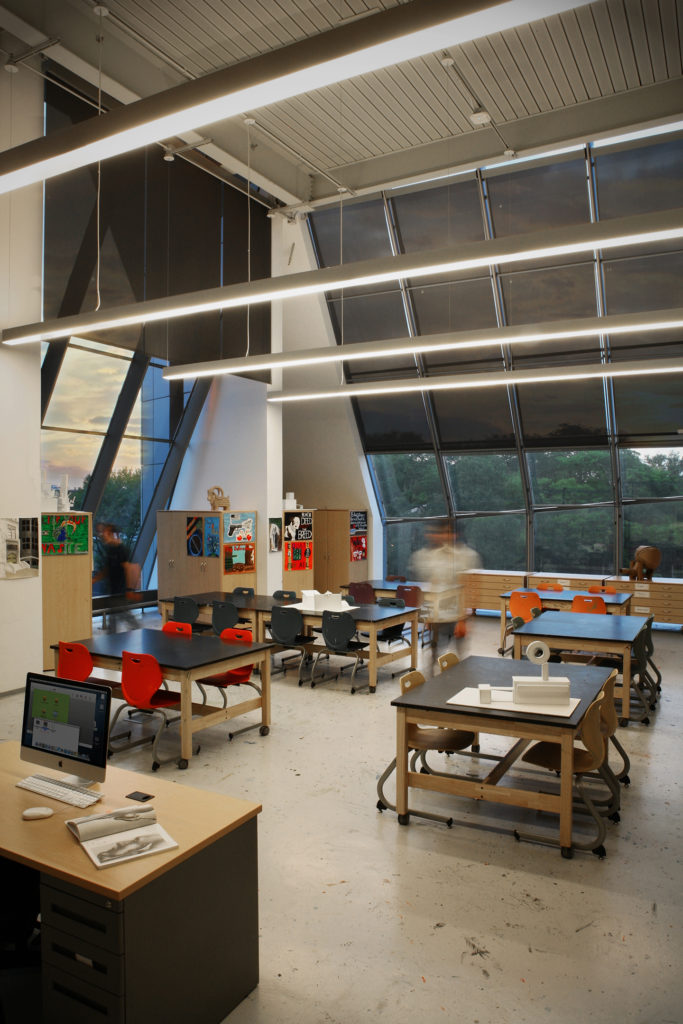 Going back to basics.
Sometimes basic is best. Take the new Gordon Parks Arts Hall, part of the University of Chicago’s Lab School. To fit with a tricky sloping and angled window, Draper designed a custom motorized shade system on tracks with re-directional rollers to help the shades follow changes in the slope.

When it came to choosing a control solution, practicality dictated local operation of the shades. The solution also needed to be simple and easy to use for anyone using the space. Bryan B. Biggers III of Beverly Venetian Blind Company chose basic 120V wall switches as the control best suited for the application.

To read a case study about the full project, click here.

Creating convenience.
Last year Commerce Tower, located in downtown Kansas City, Missouri, was renovated as a vertical neighborhood, including apartments, a restaurant, daycare, college (Park College), dog park, and more. The battery-powered FlexShade® Recharge was chosen for the project. The majority of the shades are in apartments, so Marsha Ross of Window Treatments and More! Inc., opted for wireless wall switches to raise and lower by room. To save from going room-to-room operating the shades, she also provided occupants with a 5-channel remote. But for the building owner’s shades, something special was provided. The FlexShade Recharge can be controlled via a phone app when provided with an optional Wi-Fi hub. With this simple step, the owner can use his phone to operate his shades from anywhere. 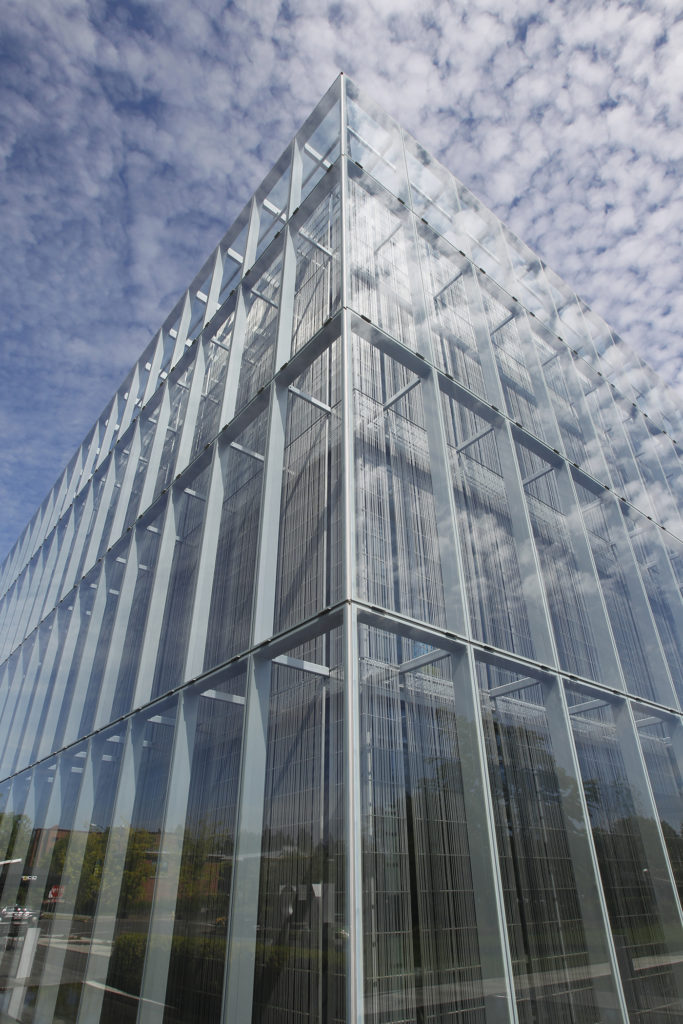 Simplifying the complex.
One central Indiana homeowner wanted control of his window shades to be part of his “smart home” system. There were 64 shades involved, and they were dual roller units, effectively doubling the amount of possible operations. Draper and Timothy Watts of SYNC Technology Integration of Indianapolis had to figure out a way to make a complex setup simple to use and understand for the homeowners. SYNCti built a custom driver for the home automation system, taking a direct RS232 signal and converting it to RS485, and sending that out over the control system’s bus line. The control interface was an iPad Mini.  It meant every possible shade operation had to be hand-programmed by SYNCti, which was a lot of work, but worth it as the customer was very happy with the setup.

For more information, click here to read a case study.

Following the sun.
Being able to keep shades advantageously positioned throughout the day is important for getting the most out of larger solar control projects. Two examples are an addition to Well’s Hall at Michigan State University, and the University of Oregon’s John E. Jaqua Academic Center for Student Athletes.

There were big differences in the projects. At Michigan State, custom color shade fabrics by Phifer were provided. In Oregon, the shades were installed inside a dual façade.

Despite those differences, the requirement was the same: make the most of the shading system no matter what time of day.

In both instances, the Draper Digital Network system was employed to maximize energy savings and control shades according to the location of the sun throughout the day.

Related Documents
Draper - Case Study - Solar Control Solutions Download here
Date: Jul 30, 2018
You must be logged in to add more than four items to your comparison list.
Register today!
With a free My-iQ account, you'll be able to keep track of the latest updates and event notifications from your favorite AV manufacturers, manage your own projects and discover new pro-AV products.
register now
close
Thank you!
Someone will be in touch with you shortly.
Contact Corporate AV Services
close